ENERGY ADVENTURES IN THE EASTERN MEDITERRANEAN 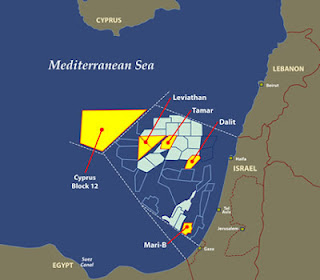 IS A NEW PATTERN EMERGING WHICH WILL CHANGE THE POLITICAL BALANCES OF THE EASTERN MEDITERRANEAN?


The petroleum prospect which got under way in 2011 to the south of the island of CYPRUS was received by the GREEK CYPRIOTS as a godsend but led to the appearance in TURKEY of headlines like “EASTERN MEDITERRANEAN’S water temperature rises.” If one looks a little further back into the past of the story, it may be observed that the EASTERN MEDITERRANEAN adventure of the GREEKS goes back to the beginning of the 2000’s.

The GREEK CYPRIOT Administration of Southern CYPRUS had long been looking for appropriate international conditions to begin prospecting for petrol and natural gas and speeded these operations up after becoming a member of the EU in 2004. It prepared the way legally by signing exclusive economic zone agreements with EGYPT, LEBANON, and ISRAEL and then waited for a propitious set of circumstances to begin drilling. Just around this time in 2010, ISRAEL announced that it had discovered about 685 billion m3 of natural gas in its Tamar and Leviathan fields. This spurred the Greek Cypriot administration into action. Taking advantage of growing international interest in the area, they divided the south of the island into prospecting zones and opened international tenders for drilling in them. It was a time of rising energy prices and anxieties caused by the Arab Spring and so international interest was aroused in the potential resources of the EASTERN MEDITERRANEAN. But it also raised questions about whether it would also give rise to a new equation which would change the political balance in the sea around CYPRUS.

ECONOMIC VALUE OF THE RESOURCES 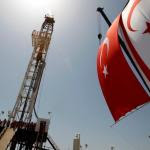 Prospecting got under way at the start of 2011 and about 140 to 220 billion cubic metres of natural gas was found in the 12th zone, known as the Aphrodite field. This caused great excitement in GREEK CYPRUS. It strengthened the belief that there were several more fields waiting to be discovered in the EASTERN MEDITERRANEAN and so put a spotlight on the region. Prospecting activities are being carried out in the EASTERN MEDITERRANEAN concentrated on three main zones of the Levant, Nile Delta Basin and the Herodotus Basin. The GREEK CYPRIOTS have focused on the Levant Field which comprises ISRAEL, LEBANON, SYRIA, and the island of CYPRUS.


According to estimates by the American Geological Research Board, there are reserves of 3.45 trillion m3 of undiscovered natural gas, equivalent to 20 billion barrels of crude petroleum, in this field. If one compares this with the 26 billion barrels in NORTH SEA reserves, the sixth largest reserves in the world, it would appear that these deposits could make the EASTERN MEDITERRANEAN into a second NORTH SEA in the future. And if one takes the estimates further, there are estimates that there could be reserves of 15 trillion m3 of gas under the sea between CYPRUS and CRETE.

GAS RESERVES UNDER THE EASTERN MEDITERRANEAN ARE TOO LARGE TO OVERLOOK

But it is still too early to describe the EASTERN MEDITERRANEAN as a new energy centre in global energy calculations. Until current drilling works are completed, these figures are no more than speculation. The most important aspect responsible for the global excitement, i.e. the real area of dispute, will emerge if these estimates are confirmed. If prospecting does conclude with the discovery of large scale deposits of hydrocarbons in the region, then their extraction and utilisation will be a common headache for all the actors in the region.

In other words, if these deposits are discovered, disputed waters in the EASTERN MEDITERRANEAN will start getting hotter. But extracting the reserves and transporting them to their markets will require many years. On the most optimistic projections, 2018 is the earliest date at which any gas finds in the Aphrodite field could be used. Consequently there would be a significant advantage for the countries involved, if existing and potentially problems could be overcome.

Energy specialists often say that it is not discovering the gas which is important but actually getting it to the markets. South CYPRUS’S annual consumption of natural gas is around 1 billion m3 and that of ISRAEL about 5 million m3. But it is still not clear how the portion which is not consumed is to be transported. Currently Southern CYPRUS has no infrastructure for transporting natural gas and so various alternatives are being examined to overcome this shortcoming. The first alternative placed on the table so far is for an LNG terminal with an annual capacity of 21 billion m3 to be built at Vasiliko on the south of the island or for a floating LNG platform. But LNG is not a profitable option as the plant would cost $8-10 billion and there would be the costs of transport and liquefaction on top of that. Though the parties involved insist they are going ahead with the project, a solution has yet to be found to overcome the technical and financial difficulties involved.

At this point, the idea of transporting the reserves through a pipeline comes on to the agenda. A pipeline is relatively cheap compared to a LNG terminal and one of the possible routes being considered is for it to go across Israel and join the Arab Natural Gas pipeline. Although this would be possible in theory, this option is currently not finding favour because of likely security problems and in particular uncertainty over when the clashes in SYRIA will come to an end. Another option would be to build an undersea pipeline between Southern CYPRUS and GREECE which would convey the reserves to the EUROPEAN UNION. But the distance involved is lengthy and financial and technical problems are also considerable and so this pipeline is not a frontrunner.

Finally one might regard TURKEY, which has considerable experience with both pipelines and energy transportation, as an important option here. A pipeline to transport the gas to EUROPE via TURKEY would be equivalent to the cost of only 10% of an LNG terminal. But the future of this pipeline scheme is deadlocked by political problems. TURKEY does not recognize GREEK CYPRUS and TURKEY has opposed its prospecting activities and so there is no possibility under existing conditions of its getting together with Southern CYPRUS on a joint venture project.

To conclude: the EASTERN MEDITERRANEAN is going to have an extremely lively future. The discovery of new reserves and the question of transporting them could trigger a new political dispute involving several parties and problems. TURKEY would be involved in the inevitable disputes, so it has to use the time available to it intelligently. It needs to back up its presence in the prospecting field with diplomacy and thought-out preparations in order to prepare for a period when current strategies will be inadequate. Rather than project the image of an aggressive actor who causes problems, it needs to utilise its existing capacity to generate comprehensive strategies based on a full awareness of the seriousness of the issue.