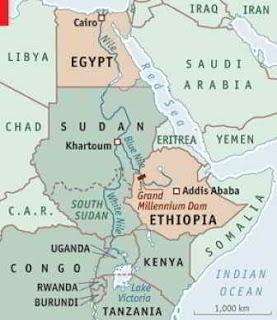 Tension is increasing as ETHIOPIA and EGYPT continue to butt heads over the Nile River. ETHIOPIA remains firm on building the $4.2 billion Grand ETHIOPIAN Renaissance Dam. EGYPT is determined to stop ETHIOPIA from building the dam, claiming that EGYPT is the “gift of the Nile” and water supply will decrease by 20% and hydroelectric power would decrease by 40%.
The battle over the Nile has already drawn neighboring countries into the dispute. SUDAN and SOUTH SUDAN have expressed their support for ETHIOPIA’S dam, while SOMALIA might show their allegiance to EGYPT.

Earlier this month, EGYPTIAN army officials arrived in SOMALIA to discuss revamping the SOMALIA National Army and building a possible EGYPTIAN military base. It appears that if EGYPT & ETHIOPIA do go to war, EGYPT is relying on SOMALIA’S strategic location to attack ETHIOPIA. In order to do so, they will need to go through SOMALILAND first – with the help of SOMALIA.

What is SOMALILAND’S stance on this issue and what role would they play? The people of SOMALILAND will never forget the role EGYPT played during the struggle years against Siad Barre’s regime. EGYPT armed and supplied military hardware that was used to slaughter the people of SOMALILAND. After reclaiming our independence in 1991, EGYPT has been using their influence in the ARAB and AFRICAN world to hinder any chance of us getting recognition.

SOMALILAND’S strongest ally in AFRICA is ETHIOPIA. Since reclaiming the independence granted in 1960, ETHIOPIA and SOMALILAND have shared an unbreakable bond. Both countries have operated on issues such as trade and security. A close relationship – but not close enough considering the fact they have yet to recognize SOMALILAND as a sovereign nation.

Regardless, SOMALILAND remains loyal to ETHIOPIA. The SOMALILAND government has made their stance on this issue clear and expressed their commitment to defend ETHIOPIA. That being said, they need ETHIOPIA to meet them half-way and take the lead of granting recognition. ETHIOPIA claims the right to use the Nile waters to develop their nation and provide for their citizens just like other countries situated on the Nile. It’s in EGYPT’S best interest to diplomatically resolve this issue with ETHIOPIA and reach a common solution that will benefit both countries. If EGYPT insists on warmongering, ETHIOPIA can definitely count on the people of SOMALILAND for help.
Posted by Ray Storch at 05:52