EGYPT: THE LYNCHPIN OF THE MIDDLE EAST (Part 1) 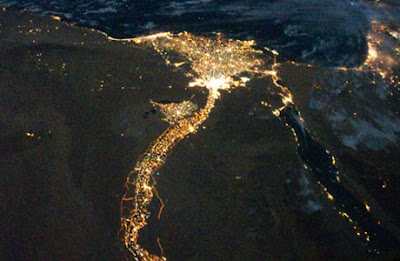 Adapted by Geopolitical Analysis and Monitoring from StratRisks

Wars have been waged in the past based upon these important straits. If EGYPT falls to militarism or radical Islam like its neighbors SUDAN and LIBYA, numerous ARAB and Western nations will suffer massive economic loss. You can have unlimited oil and LNG on hand but you need safe shipping routes in which to transport it. With this understanding EGYPT is not truly sovereign and that is why it is in a constant state of flux. ISRAEL, SAUDI ARABIA, QATAR, IRAN and other actors and countries are in the midst of a covert battle royal to influence EGYPTIAN affairs.

It is no coincidence that crude oil prices rose above $100 on the very day General Al Sisi overthrew the government of President Morsi in EGYPT. Supply risk is a constant fear in an oil market where global spare capacity (mainly SAUDI) is only one million barrels a day (mbd). Even though EGYPT is not a major oil exporter or a member of the OPEC, it has the SUEZ CANAL and the SUEZ MEDITERRANEAN, or SUMED pipeline, where oil tankers transport 2.5 mbd of mainly GULF crude to refineries in EUROPE and NORTH AMERICA. The SUEZ CANAL is one of global gas critical chokepoints, as geopolitically significant as the STRAITS OF HORMUZ and MALACCA

It was a foregone conclusion that a nation as important to the world as EGYPT is, would not be left in the hands of the Muslim Brotherhood. The brutality of the Mubarak regime was well known, most considered the region stable and their important business continued uninterrupted. ISRAEL’S intelligence apparatus monitors the tectonic shifts in EGYPT in relation to the Gaza Strip. If EGYPT sneezes, the Gaza Strip gets a cold. ISRAEL would find itself under a serious threat if the EGYPTIAN leadership had friendly relations with militant Islamic groups like Hamas. It is a dangerous yet delicate balance.
ISRAEL’S foreign minister has warned his Prime Minister that EGYPT presents more of a security threat than IRAN. Subsequently the foreign minister urged the PM to create three to four southern divisions in the wake of a social and economic deterioration in EGYPT and the increasing number of EGYPTIAN arms buildup in the SINAI PENINSULA.

THE ONE WHO COMMANDS THE SUEZ STRAIT CONTROLS A MAJOR PORTION OF THE GLOBAL ECONOMY,

substantially dependent upon trade and commerce. Washington’s relationship with EGYPT angled as humanitarian aid ends up being billions of dollars annually in foreign military financing grants supplying EGYPTIAN military apparatus with heavy weapons used to control and retain the allegiance of the uprising population and purge any subversion. The interdependent relationship between the U.S. and EGYPTIAN military is coherent, billions of dollars to maintain EGYPT’S military elite-led government, the uninterrupted military coordination and movement of the regions oil resources to the UNITED STATES and EUROPE and the establishment of a U.S. military bridgehead in a geo-strategic location for future military operations or conflicts in regions rich in hydrocarbon deposits, the MIDDLE EAST and the CASPIAN Basin.

For US military planners, the sudden loss of access to EGYPT would present a double problem. Without EGYPT, they would find their options for shipping air and sea cargo, refueling and repairing aircraft and consolidating troop movements narrowed to those along the Persian Gulf. The loss of landing rights in EGYPT, for example, might mean that in a crisis, wide-body jets, each carrying hundreds of troops, would have to fly directly into congested Persian Gulf airfields, rather than into Cairo West, from which smaller transports would ferry troops into action, furthermore Persian Gulf facilities are increasingly vulnerable to IRANIAN ballistic missiles.

A  major strategic review completed by the Pentagon last year indicated that US forces need access to bases more resilient than today’s in the face of attacks. Planners are looking for ways to fortify those bases, with missile defenses being a high priority, but protecting high value airfields and ports where troops are disembarking is somewhat of a challenge.

In war-fighting terms, the loss of EGYPT might also force a greater reliance on long range strike assets – strike fighters, bombers and missiles – at a time when the US arsenal of such weapons is limited. In a MIDEAST war, fighter jets once might have launched from EGYPTIAN airfields, without EGYPT, they’d have to operate from carriers – themselves vulnerable – or fly exhausting air refueling missions from distant bases in CYPRUS, TURKEY and EUROPE. The longer a mission lasts, the fewer daily sorties can be scheduled.

AFRICA: THERE’S GOLD, URANIUM AND OIL IN THEM THAR HILLS

France and its allies have revitalized a military campaign for NORTH AFRICA,  providing security and protection of foreign economic interests, uranium sites, gold mining and oil reserves.
FRENCH military is tighten its grip on NORTH AFRICA by supporting AREVA CORPORATE INTERESTS to preserve a ’FRENCH’ dominant sphere in the region by providing vital security for the key strategic Imouraren uranium mine and oil resource centers. CANADIAN mining companies are actively involved in MALI gold mining and other ventures with a large bulk of the investment summed up in one word: GOLD.
FRENCH owned TOTAL SA already draws 28% of its oil output from AFRICA. The presence of significant uranium deposits in neighboring NIGER is also of utmost importance for FRANCE and other actors in the region. FRANCE in particular is reliant on uranium for a large portion FRANCES energy supply is nuclear based and thus it relies on NIGER’S uranium supply which accounts for almost 40% of Frances uranium consumption.
The strategic mobility of FRENCH Special Forces, UK Special Forces , AFRICOM, Defense Intelligence Agency, Central Intelligence Agency, CANADIAN Special Forces and EUROPEAN UNION Special forces have built up their intelligence and war fighting skills by conducting quick and surgical strike operations in LIBYA, MALI , the SAHEL and MENA.

WHAT IS THE POLITICAL AND MILITARY AGENDA IN ALL THIS? 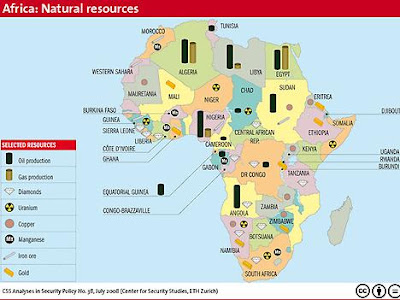 THE SECRET WAR BETWEEN CHINA AND THE US FOR AFRICA'S OIL RICHES
http://geopoliticsrst.blogspot.co.at/2012/12/usa-china-and-africa.html

OUT OF AFRICA ……AND BACK IN
http://geopoliticsrst.blogspot.com.ar/2012/04/africa-forgotten-and-underestimated.html

CHINA AND ITS RELATION WITH AFRICA AND THE MEDITERRANEAN http://geopoliticsrst.blogspot.co.at/2013/07/china-and-its-relation-with-africa-and.html

SOMALILAND’S ROLL IN A POTENTIAL MILITARY CONFLICT BETWEEN ETHIOPIA AND EGYPT http://geopoliticsrst.blogspot.co.at/2013/06/ethiopia-somaliland-and-egypt.html


CHINA is increasingly searching for iron – ore supplies in AFRICA. Allegedly there are 35 billion tons of direct shipping iron – ore available in AFRICA, which amounts to a production potential of between 400 to 600 million tons a year.


Currently the 27 EU member states import 85% of their oil needs and 65% of their natural gas. It is estimated that by 2030 those numbers will be 95% and 85% respectively. Up to now EU countries have no oil and gas production or fields. This could change however if recent gas findings south of CYPRUS and in GREECE are prove to be feasible for extraction.

COULD IT BE THAT THE TROIKA IN REALITY FOCUSES ON TAKING CONTROL OF CYPRUS’S PROCLAIMED HYDROCARBON FINDINGS?
http://geopoliticsrst.blogspot.com.ar/2013/03/cypruss-financial-crisis-and-its.html


GAS RESERVES UNDER THE EASTERN MEDITERRANEAN ARE TOO LARGE TO OVERLOOK http://geopoliticsrst.blogspot.co.at/2012/12/energy-adventures-in-eastern.html

CHINAS increasing influence in AFRICA, characterized by large sums of money with few strings attached in exchange for mineral concessions, is a concern for the USA. This rivalry may come to shape the future of a continent already marked out like an imperial jigsaw puzzle.

U.S. CONTINUES TO PORTRAY THE ILLUSION OF A SECONDARY ROLE IN THE GEOGRAPHIC SCOPE OF CONFLICT IN NORTH AFRICA

It is interesting that orthodox military operations conducted during “Operation Serval” (http://en.wikipedia.org/wiki/Operation_Serval) have done absolutely nothing but turn the region into a big black hole of uncertainty, blow back central with printed permanent war in the SAHEL. The military’s objectives are to position forces to ensue stable perimeters of high value geographic areas, control risks and the neutralization of Al Qaeda in the Islamic Maghreb (AQIM) and network affiliates. Foreign Minister Laurent Fabius announced the proposal to keep permanent combat forces in MALI and actively seeking to install a military base in LIBYA. As the U.S. continues to portray the illusion of a secondary role in the geographic scope of conflict in NORTH AFRICA, U.S. AFRICOM and GERMAN KSK have been active for years in MALI. Cloaked in secrecy, the U.S. military drone base in NIGER provides a strategic foothold to conduct ISR missions to target and terminate high valued targets with predator drone programs. Pentagon/ private mercenary in and out warfare tactics with incidents and operational details not disclosed to the U.S. public by means of the US Army seeking private contractors for AFRICAN commando transportation and multitudes of U.S. military contractors eyeing AFRICA. The cohesive EU, NATO, Pentagon and mercenary force campaigns will continue under the guise of peace-keeping operations to take advantage of social discontent, ferment sectarian division and political regime change.

The FRENCH and the BRITISH in their heart of hearts still believe that they can control the state of affairs of various countries in the MIDDLE EAST and NORTH AFRICA. Sykes and Picot (http://en.wikipedia.org/wiki/Sykes%E2%80%93Picot_Agreement) have long since died and numerous rebellions have taken place to wrestle power away from EUROPE. Yet EUROPEAN influence still lingers like a ghost and their geopolitical desires are still as strong as they were in the 1900’s. Nicolas Sarkozy, the former president of FRANCE introduced a regional framework called the ’UNION OF THE MEDITERRANEAN’. This power play could transform the MENA region into a satellite super state for the ultimate benefit of EUROPE and the USA. 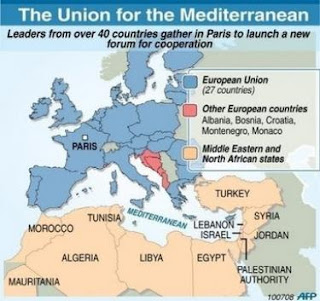 The geopolitical and political motives behind this proposal seemed fairly obvious at first sight. Politically, Sarkozy’s interest in setting up the MEDITERRANEAN UNION would be to offer TURKEY an alternative to full EU membership. This is certainly how the plan is being peddled in Paris. The second geopolitical motive would be to reinforce FRANCE’S weight on the world stage.
The creation of a political “Club Med” is perhaps a typical example of the FRENCH love of the politics of the grand gesture, but there seems little doubt that it would institutionalise FRANCE’S leadership role in an area where she has huge historical ties and considerable political influence, from NORTH AFRICA to LEBANON and SYRIA.

Perhaps the motives behind the MEDITERRANEAN UNION lie elsewhere, therefore. The plan, indeed, bears some resemblance to the “GREATER MIDDLE EAST” project favoured by the AMERICAN neo-conservative strategists.

Even more striking is the resemblance between Sarkozy’s plan and the existing Mediterranean Dialogue set up by NATO in 1994. The relevant page (in English, French, Hebrew and Arabic) can be seen here. Numerous Maghreb states have already signed partnership agreements with NATO. In other words, the MEDITERRANEAN UNION would be but a political superstructure over a military organisation which already exists and which is under US leadership. –Brussels Journal

The so-called ’Arab spring’ has changed the political landscape and those countries that weren’t in favor of EUROPE might have had a change of heart. Interestingly enough, the conflict in LIBYA, the current proxy war in SYRIA, and the second coup in EGYPT help EUROPE work towards their EUROMED project tremendously. NORTH AFRICAN nations like LIBYA, ALGERIA and MOROCCO are assisting EUROPE to establish a new oil and gas route that will lessen the dependence on RUSSIA.

While the UNITED STATES has made a pivot towards EURASIA, EUROPE is selling weaponry to ARAB states who hope to secure their borders for any eventualities with IRAN or SYRIA. The problem with these uprisings in the MENA region is that in the minds of ARAB youth (YOUTH UNEMPLOYMENT HAS ALWAYS BEEN A HARBINGER OF REVOLUTION http://geopoliticsrst.blogspot.com.ar/2012/11/the-geopolitics-of-youth-unemployment.html ) they have no real yardstick that would measure any progress and could be easily manipulated for the geo-economic and geopolitical goals of foreign states. EUROPE could start the wildfire that could clear a path to economic security and integration or for their own demise.
Posted by Ray Storch at 17:24